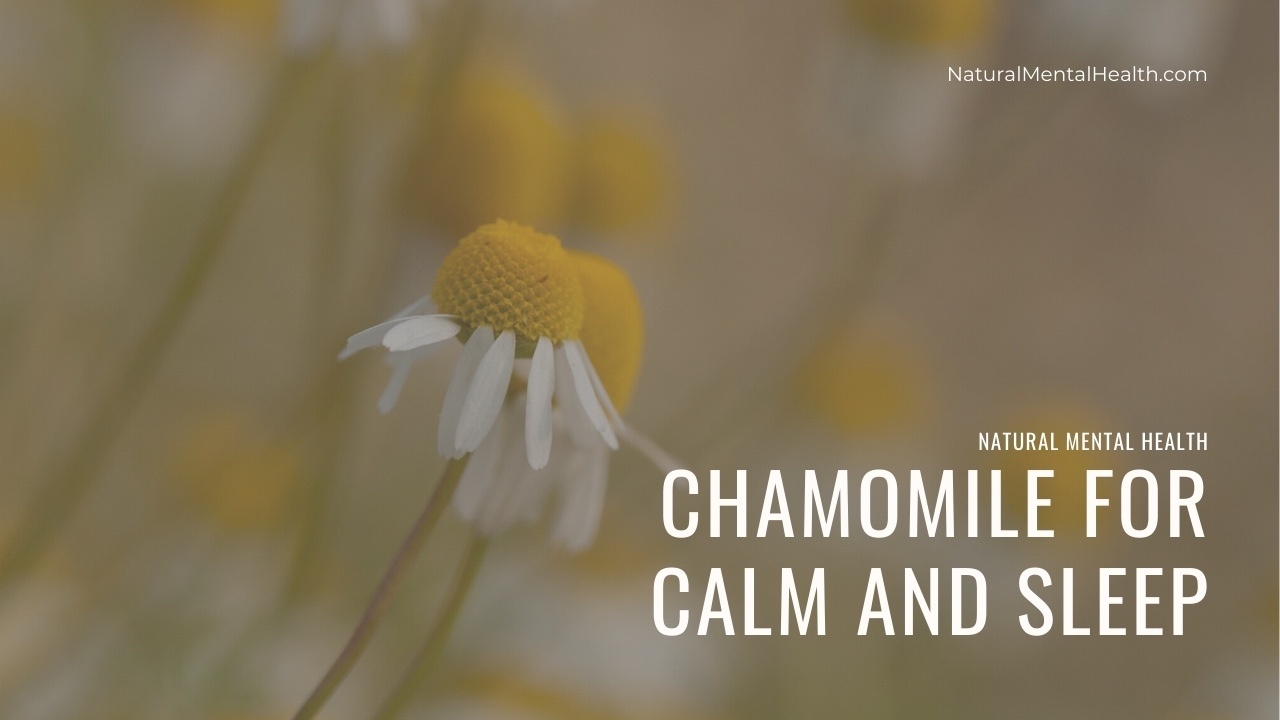 Chamomile for Calm and Sleep

Chamomile is widely recognized as a mild tranquilizer and sleep-inducer. It is thought that chamomile may increase brain neurotransmitter activity (serotonin, dopamine, and noradrenaline) and thereby have positive effects on mood and anxiety. The herb smells somewhat like an apple, which may explain its name, rooted from the Greek word khamaimēlon or "earth apple."

Chamomile is also utilized for its antioxidant, antimicrobial,  anti-inflammatory, antidiarrheal, angiogenesis, and anticarcinogenic activities. It also has liver protecting effects. It may be helpful for knee osteoarthritis, ulcerative colitis, premenstrual syndrome, and gastrointestinal disorders.

Chamomile for Anxiousness and Sleep

As noted above, Chamomile is commonly regarded as a mild tranquilizer or sleep inducer. Its calming effects may be attributed to an antioxidant called apigenin, which is found in abundance in chamomile tea. Apigenin binds to specific receptors in your brain that may decrease anxiety and initiate sleep.

In one study of 60 elderly people  (single-blind RCT), comparing placebo capsule to 200 MG twice daily of a standardized chamomile extract, the chamomile group had significantly improved sleep quality as compared to the control group. No adverse effects were reported in the chamomile group.

Chamomile can also be used for anxiety. In one study, subjects with moderate to severe GAD received open-label treatment with pharmaceutical-grade chamomile extract 1,500 mg/day for up to 8 weeks. The primary outcome evaluated was the frequency of clinical response and change in GAD-7 symptom scores by week 8.

58% of the participants met criteria for the clinical response and participants also experienced significant improvement over time on the GAD-7 rating. Statistically significant and clinically meaningful reductions in secondary outcome ratings of anxiety and wellbeing also occurred. Adverse events were reported in almost 12% of subjects, though none were identified as serious events.

Chamomile Dosage and Use

There is no standard dose of chamomile. Studies have used between 220 milligrams to 1,600 milligrams daily in capsule form.

If you choose to use chamomile, use it as directed on the package or as directed by your doctor, pharmacist, or other healthcare provider. Do not use more of this product than is recommended on the label. Do not use different forms (tablets, liquid, tincture, teas, etc) of chamomile at the same time without medical advice. Using different formulations together increases the risk of an overdose.

Common side effects of chamomile can include:

Some experts suggest that you should not use chamomile if you have past or present cancer of the breast, ovary, or uterus; or a history of endometriosis or uterine fibroids.

Ask a doctor, pharmacist, or other healthcare provider if it is safe for you to use this product. It is especially imperative you to speak with you doctor if you have pollen allergies (especially to ragweed, herbs, chrysanthemums, marigolds, daisies, and other plants).

If you take any drugs regularly, talk to your doctor before you start using chamomile supplements, which could interact with sedatives, blood thinners, anti-platelet drugs, aspirin, NSAID painkillers like ibuprofen. Chamomile could also interact with gingko biloba, garlic, saw palmetto, St. John's wort, and valerian.

It is not known whether chamomile will harm an unborn baby, so it's likely best to avoid using this product if you are pregnant.

Supplementing with a high-quality, moderate dose, activated B-complex vitamin can be one of the simplest, safest, and surprisingly helpful things to start with for almost anyone dealing with depression. Of course, there are exceptions, which are noted in the article and you should always check with your doctor before beginning any new vitamin or supplement.