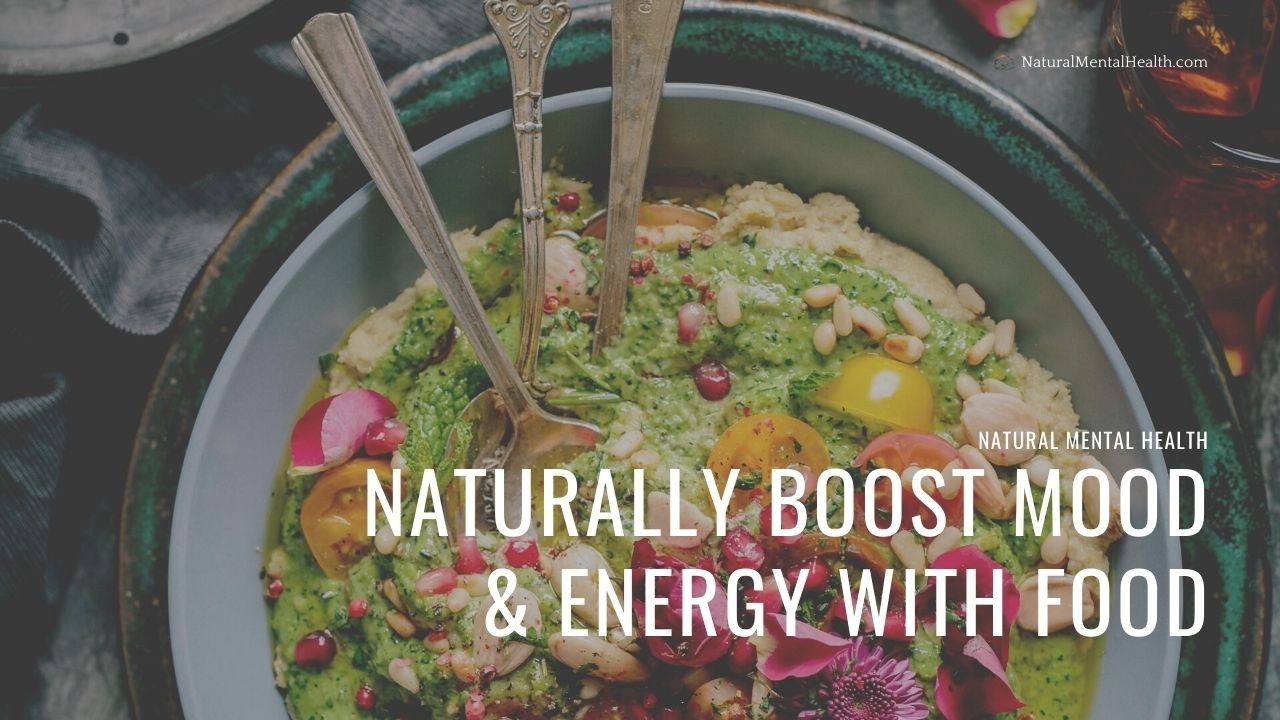 Naturally Boost Your Mood and Energy with Food

“Tell me what you eat and I will tell you who you are.”

As far back as 1826, Savarin knew “we are what we eat,” and– more specifically– who we become. Functionally speaking, “food is information.”

Foods contain nutrients which provide directions to the systems of the body about how they will function, creating either positive or negative consequences. The nutrients we consume send messages to the brain and body about how it is going to behave. When we think of “food as information,” the focus becomes foods to include rather than foods to exclude.

The body and the mind are a connected, collaborative, community of interdependent systems. For example:

A well-nourished body, feeding all the systems, provides a foundation for a balanced state of mind.

When addressing mood, we often place blame squarely on the thinking brain. We strong arm ourselves with comments such as “Cheer up, what’s wrong with you?” or “Buck up, you should be able to cope better than this.”  In reality, much of what influences mood is the ‘information” the body receives from food. An important example is the endocrine system.

Two such messenger hormones (AKA neurotransmitters) that govern mood are serotonin and dopamine.

Serotonin. Functionally, serotonin creates a sense of wellbeing. Serotonin is calming. It is the hormone that enables sleep, digestion, relaxation and a calm mood. Serotonin also allows for social engagement. When serotonin is out of balance, negative thoughts arise, sleep disorders can develop, and anxiety and depression may increase.

Dopamine. Dopamine on the other hand, excites. It is used for focused learning, concentration, attention, motivation, rapid movement, and it is the pleasure/reward center of the brain. When dopamine is out of balance, restlessness abounds, concentrating becomes difficult, and attention issues can develop. When dopamine is low, there can be an inability to relax and an increase in impulsive behaviors.

Consider dopamine in a common situation: Some people feel that they are addicted to certain foods, specifically sugar—to the degree that once they start eating, they cannot stop. Why? Researchers have found that in the brains of some people, sugar provokes the same dopamine response as cocaine, setting up a craving cycle that can cause people to lose control over the amount of sugar they eat. It’s possible, the researchers suggest, that what looks like an addiction to sugar is actually an imbalance of dopamine. In that case, avoiding sugary foods would not be a complete solution so much as providing the nutrients needed to produce and release dopamine.

Likewise, low levels of serotonin in the brain are associated with both depression and sleep issues. In order to synthesize serotonin, the raw materials needed include nutrients such as protein, specifically the amino acid tryptophan. Also required are B-vitamins, magnesium, oral vitamin D, vitamin C, and complex carbohydrates. If any one of these pieces of information are not provided, serotonin production is affected.

The following list presents the “recipe” for making neurotransmitters such as serotonin and dopamine.

Foods that Increase Serotonin and Dopamine

In addition to the influence of nutrients, there are some common dietary saboteurs that also influence mood. One common saboteur is the balance of energy in the body, dependent on the type of carbohydrates we eat. Carbohydrates are foods that get broken down into glucose molecules, also known as blood sugar.  A “simple carbohydrate” such as candy, gets released as glucose very quickly, whereas a “complex carbohydrate” such as a piece of fruit is released more slowly.  In this case, slow is good—it is much easier for the body to process a steady supply of blood sugar.

If a pattern of eating favors simple carbohydrates, then the balance between glucose (energy) and the delivery of that energy becomes imbalanced. If this imbalanced pattern of excess glucose continues, eventually glucose cannot be effectively delivered into the cells. As a longer-term pattern, this has a much bigger impact on mood than most people realize. When this pattern is present, the brain cannot efficiently release dopamine.

How to Eat to Create Energy Balance

The Basics of Eating to Boost Energy

Foods to Include to Balance Energy

Foods to Reduce or Avoid to Balance Energy

Much is still undetermined about what makes up ‘the perfect diet.” However, one thing we know for sure--altering the “information” the body receives, by either skipping meals or overindulging, are habits that interfere with natural functioning of the body and can send your hormones into a tailspin. This knowledge can be added to a growing list of reasons for eating nutritionally balanced meals, at regular intervals throughout the day. Foods that provide vital  “information”  in order to support both good mental and physical health are essential to who we become.

Carolyn identifies underlying physiological imbalances that contribute to chronic health issues. Food is information. The body requires nutrients for direction and function.  What and how we eat is the natural solution to restoring balance. Stress influences the body in profound ways; digestion, sleep, mood, concentration and even how we store energy are all affected. Carolyn incorporates mindful eating and meditative practices to enhance vitality and reduce stress. Contact Carolyn at Partners in Resilience.